Bob McElroy strode through the busy entrance of the vast, gleaming-white tent, greeting people right and left. The prominent homeless services provider calls the new structure, located on the outskirts of downtown San Diego, “the Rolls-Royce of tents”.

It is double-insulated and has wifi. And it is the sunny seaside destination’s millionaire-funded attempt to get a grip on an emergency that sees thousands of homeless people sleep on its streets every night.

The industrial-sized tent holds 324 people in neatly spaced, numbered bunks. People can bring their pets, and 70 dogs also live in the shelter. It offers a bed and services – from healthcare to employment assistance to showers and laundry – while people wait for a place of their own. In appearance, it evokes a military installation or a refugee camp.

“You come in here with nothing and they provide everything,” said Sylvia Saliman, 58.

Saliman sat on her top bunk with Daisy, her American blue nose pitbull, who was napping after a long walk. Saliman said she had been homeless for 16 months and in the shelter for two. She said she’d lost everything except her dog. Thanks to the tent, “I’m doing great right now,” she said.

Cities throughout the western and southern US, such as San Diego, face a dilemma: they are grappling with visible, intransigent street homelessness, and the supply of affordable housing is meager and increasing only slowly. This tent, along with two others built by the city, fills the gap – it is known as a “bridge” shelter.

Officials from California cities large and small, including Los Angeles, San Francisco, Fresno and Oxnard, have come to tour the structures. The Fresno city council member Steve Brandau brought a group to San Diego in February and said a huge tent could be the solution for his city’s shortage of about 150 beds. “We like the San Diego structure,” he said, “the feel of it, the types of services provided.”

It is not the first time San Diego has housed people in large tents. For nearly three decades, two such structures, one for veterans and one for adults, went up during winter months. But that program was scrapped in 2015.

“In the communities where they’re solving homelessness, they’re not doing it with tents,” the then city council member Todd Gloria told the San Diego Union-Tribune. 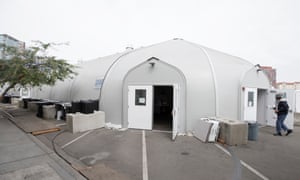 A spike in homelessness, especially downtown, and, last year, a deadly outbreak of hepatitis A that killed 20 people and had the city washing its sidewalks in bleach, forced city leaders to reconsider. Two wealthy San Diego businessmen, Dan Shea, a restaurateur, and Peter Seidler, managing partner of the San Diego Padres baseball team, told Mayor Kevin Faulconer they would put up $1.5m for new tents if the city would fund the operations for at least two years.

Shea and Seidler say they represented a larger San Diego business community frustrated by a lack of action on the part of elected officials. It will take years to build the necessary housing, Shea said in an interview with KPBS radio. “Do we just leave those people on the street for five years, seven years, 10 years waiting for housing to be built?”

Beds are prioritized for people with mental or physical disabilities who qualify for housing subsidies. They are also available for people who just need a few months of respite to get back on their feet. Everyone in the shelter is paired with a housing “navigator” whose job is to find appropriate housing as quickly as possible. Altogether, the three tents have almost 700 beds.

“Without this, can you imagine how hard it is to find a client on the streets?” said Amy Gonyeau, chief operating officer for Alpha Project, the service provider that runs the tent for adults. “Now we know where they are – well, at least 700 of them.” 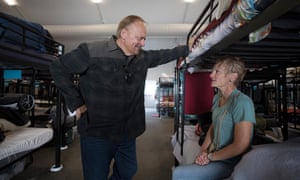 The goal is for providers to move about two-thirds of shelter residents into permanent housing within four months, yet early data shows meeting this goal might prove challenging. During its first four months of operation, 44 people from the largest tent, with its capacity of more than 300, moved into permanent housing. Another 15 exited to other programs or moved in with family or friends.

As elsewhere in California, “there is no permanent housing,” McElroy said about the lagging housing placements. “Folks with jobs and good credit and college educations, they can’t find places to rent … If [housing] was there, we’d be taking them out by the friggin’ busload.”

Despite the delays, McElroy said, a tent is still better than a street corner.

A few bunks over from Saliman was Danila Hendrix, also 58, who had been in the shelter since early January. She had been in the tent that closed in 2015, then back out on the street, where she was the victim of multiple assaults. A housing navigator is helping her find a new home.