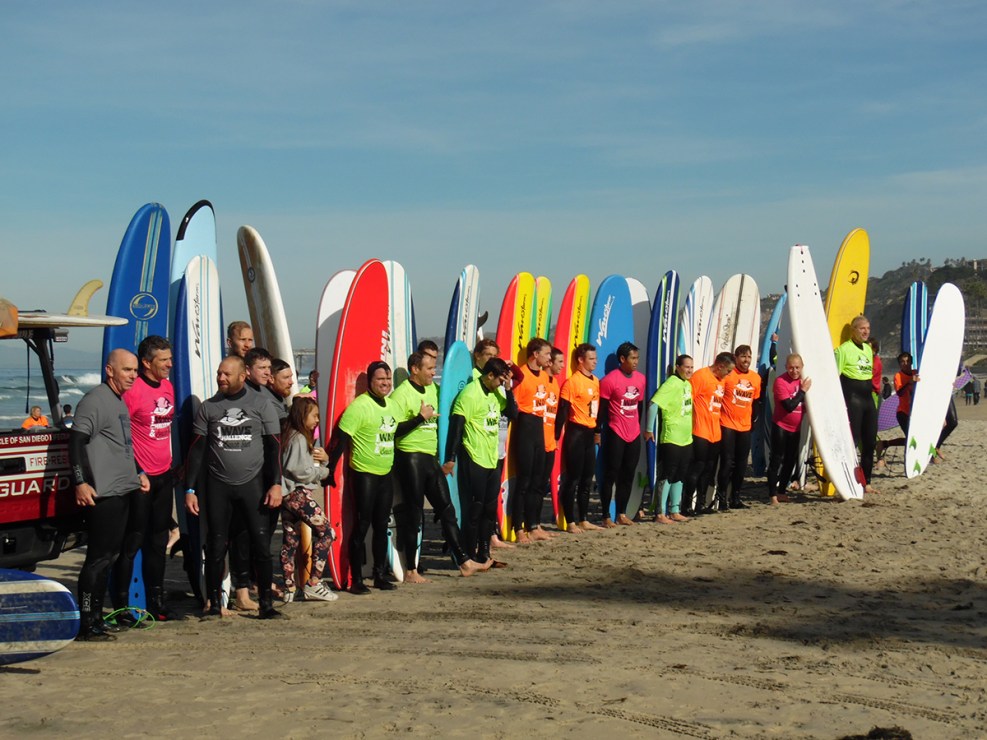 Surfers hit the cold water at La Jolla Shores, in an attempt to break the Guinness World Record for the most surfers riding on a single wave into shore. Under a blue sky in 56-degree weather, 172 surfers, 65 runners and 99 joggers/walkers  – of all ages and experience – joined the One Wave Challenge & Beach Run Saturday morning.

“You got this, you got this!” Surfers cheered each other on as they stood on their soft top surfboards in an attempt to set a new world record previously set at 110 by a group in Cape Town, South Africa.

“It was really fun,” said Kyla Buss, a surfer who attended the event for the first time. “Just being out there and having fun with my friends … everyone was together just being a community.”

The event benefits Boys to Men Mentoring Network, a San Diego nonprofit dedicated to guiding and supporting at-risk and often fatherless boys on their journey to manhood.

Brian Mulvaney, a volunteer Mentor at Boys to Men Mentoring, was part of the One Wave Challenge last year, where 97 surfers were able to ride a single wave for seven seconds. This year, surfers weren’t quite as close.

“Even though we didn’t break the record, we will next year,” Mulvaney said. “This year the surf wasn’t as big, last two years we had big surf and big tide. We did a good attempt.”

There was a soft ENE breeze at La Jolla Beach, Saturday morning, with 2 to 4-foot waves. Of 12 attempts, one particular wave (#5) looked promising. The wave, “swept up a lot of the surfers in the lineup,” said Ernie Hahn, One Wave Challenge founder.

Joe Sigurdson, Community Development Director and Co-founder of Boys to Men Mentoring said he first came up with the idea for the program when he realized four of his son’s friends didn’t have dads.

“Those four boys were at my house every day for the next ten years and none of them had dads,” Sigurdson recalled. “I was their [Little League] coach, and I became their surrogate dad. When they started getting into trouble, I said we got to do something to teach these guys what it is to be a good man,” Sigurdson said.

17.2 million children, one in four children, live without their biological father in the same household, according to the latest U.S. census bureau. The Boys to Men Mentoring program brings light to the “Fatherless Epidemic” that America is currently facing.

According to Sigurdson, growing without a father is one of the predictors of whether a boy will succeed in academia or as an individual.

Sigurdson said it costs $20,000 a year to host an in-school program, and the One Wave Challenge helps fund the program.

This year, Boys to Men Mentoring will receive matching funds from the money raised during the event as part of their partnership with The Century Club of San Diego’s Champions for Youth campaign.

Mulvaney, has mentored hundreds of kids during his time at Boys to Men, he said this is the most rewarding thing he has done within his community.

“Our first boys have actually gone all the way through college,” Mulvaney said. “Out of our first 10, we lost track of one, one is in prison for life and the other eight have all finished college. “I even show the kids we lost a kid last year that didn’t stay with the program, he got involved with a gang and got shot and killed. So, I show kids the picture of that guy and tell them… I can’t save every kid, but we can save a lot of them,” Mulvaney said.